For over a year, almost since we first arrived in Glasgow, I have been trying to work out a possible walking pilgrimage route for groups of women to follow, along the lines of the route to Lindisfarne where I have led a number of groups from Methodist Women in Britain (and about which I have blogged before.)

My idea was to link Glasgow, where we live, with Whithorn in Galloway.  That area is strongly associated with St. Ninian who is thought to have brought Christianity to Scotland in the fourth century. As such an early saint, hard facts about Ninian are few (possibly none) but the sites associated with his arrival, life of prayer and ministry abound in Southern Scotland (and in parts of Northern England, he is thought to have come originally from Cumbria).  Thanks be to God for St. Ninian. 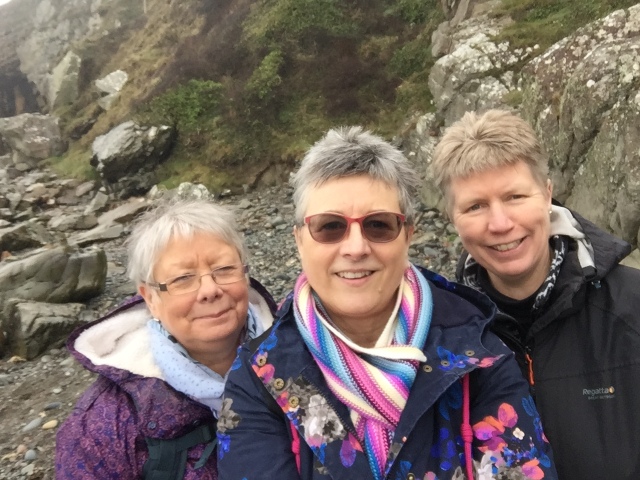 The route is around 150 miles in total, so, although there is work being done by others on a “Whithorn Way” covering the entire distance, I needed something less arduous, probably involving trains and buses, to offer as a week’s pilgrimage.  This has been proving elusive, especially the southern sections, but on Thursday I set off into this less accessible part of Scotland with my good friends Kathleen and Gail who had valiantly agreed to show me the area they know and love so well as we tried to work out a route.  Thanks be to God for them! We arrived on the Isle of Whithorn in beautiful sunshine and explored the beautiful peninsula before the first of two very comfortable nights in the Steam Packet Inn (highly recommended!)

On Friday, with plans hampered by bad weather, we made a spur of the moment decision to call on Rev. Clare Burl, a supernumerary Methodist minister living in Glenluce and known to Kathleen and Gail.  This proved to be a wonderful “God-moment”, not only did she welcome us (and Heather, another friend who called at the same time) with warm hospitality in the midst of her own sermon-preparation, but her knowledge of the area and her ideas and suggestions for pilgrimage locally provided just the break-through I needed!  It may still be a while before the route is up and “running” but I now believe it can happen!  Thanks be to God for those unexpected encounters which can (literally) change our pathways.

More another time about the awe and wonder we felt on the beach at St. Ninian’s cave – as the sea tossed and surged against the pebbles and we took some time to pray, light candles and soak in the atmosphere of prayer in that ancient, holy refuge.  Thanks be to God for time to “turn aside and see”.    Jill 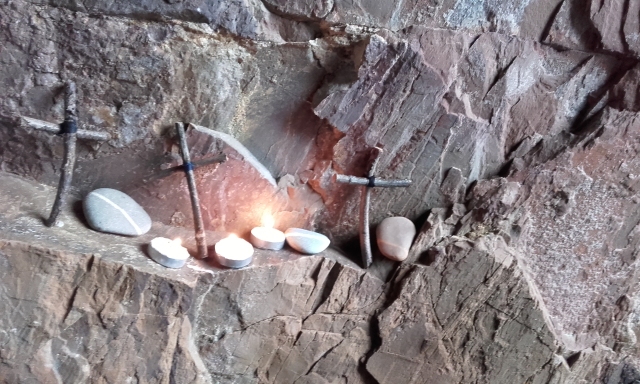 3 thoughts on “In St. Ninian’s footsteps”